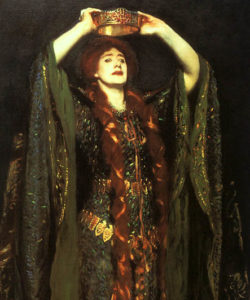 Lady Macbeth is Macbeth’s wife. When the audience first sees her in I.v, she is reading a letter from Macbeth about his encounter with the weird sisters and about his new title. Lady Macbeth promises to provide Macbeth with the courage he needs to make the prophecy come true, fearing that his nature is too soft to take the direct route to the throne.

There is some controversy over the role Lady Macbeth plays in the murders that follow. Some critics maintain that responsibility for the deaths of Duncan and Banquo rests solely with Macbeth, whose own ambition and nature are the cause of his deeds. Others cite Macbeth’s reluctance prior to Duncan’s murder and argue that Lady Macbeth goads her husband into the action. Lady Macbeth does, however, set the time and the place of Duncan’s murder, claims that she would kill a baby at her breast to honor a vow, and argues that when Macbeth first conceived of killing Duncan, then he was a man.

In contrast to Lady Macbeth’s forceful disposition on the first three acts of the play, her actions in the last two acts are much less confident or ambitious. Lady Macbeth in the sleepwalking scene appears to be tormented by her knowledge of Macbeth’s actions. In V.i, Lady Macbeth reviews the various crimes her husband has committed and appears to be attempting to wash blood from her hands. This scene contains Lady Macbeth’s famous “Out damn’d spot!” (V.i.35) speech. The doctor diagnoses her mind as “infected” (V.i.72) and says she needs spiritual counsel more than she needs a doctor. Later she commits suicide.

The very name of Lady Macbeth conjures a legion of evil associations, for the female protagonist of Shakespeare’s Scottish Tragedy has come to represent feminine treachery. Lady Macbeth’s ambition, her duplicity, and, the unnatural absence, indeed, the outright rejection, of such female values as compassion and nurturance mark her as a heartless villain, more monster than woman. It is, of course, Lady Macbeth herself who spawns the plot to kill Duncan, who determines the setting and the specific actions through which this bloody deed will take place. The speech in which she “de-sexes” herself (Act I, scene v) is one of the most frightening expressions of unnatural evil in all of Shakespeare’s works, ranking alongside the evil speeches of Iago, Richard III and the bastard Edmund of King Lear.

But this appraisal of Lady Macbeth’s evil character, while certainly accurate, requires qualification if not some revision. There is, to begin, her affection toward Macbeth—a genuine, if distorted, bond of love holding the two together. More important, Lady Macbeth is humanized by her own decline into guilt-ridden madness.

Until the death of Duncan, Lady Macbeth seems, in the words of A. C. Bradley, to be “invincible and inhuman.” But when she reappears in Act V, Lady Macbeth has been reduced to a wretched state, and (presumably) to the taking of her own life. Touchingly, the “mad” Lady Macbeth turns to her function of protecting her husband even though Macbeth has quit all domestic concerns to defend his ill-gotten throne. As the doctor and others observe her actions, Lady Macbeth seems caught in the routine of assuring Macbeth that he has no cause for fear, as she speaks the lines: “Wash your hands, put on your night gown / Look not so pale. I tell you yet again / Banquo’s buried. He cannot come out on’s grave” (V.i.62-64). Here Lady Macbeth is speaking to both her absent consort and to herself. But the union between Lady Macbeth and her husband has disintegrated under the weight of the evil that they have done and of the further evil that Macbeth does for their sake.