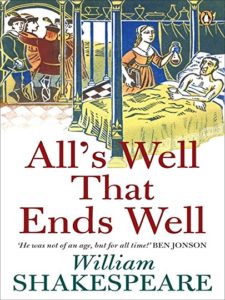 Bertram, the son of a widowed countess sets off from Roussilon with his friend, Parolles, and the Lord Lafeu, to the French court. He is the ward of the French king. He is unaware that Helena, orphan daughter of the countess’ physician, raised in the household of the countess, is in love with him. The countess gives her permission to try and cure the king’s illness. No-one has been able to cure him but Helena succeeds and, as a reward, the king invites her to choose a husband from among his wards. She chooses Bertram. Bertram’s ambitions for a wife go beyond her, however, and although he marries her on the king’s orders, he runs away with Parolles to fight in the wars in Italy.He writes a letter to Helena, telling her that he will not recognize the marriage until she can demonstrate that she is wearing his heirloom ring and carrying his child.

Helen is even more bummed than Bertram, but not because her father is dead. It turns out that Helen’s been nursing a big, secret, and semi-incestuous crush on Bertram. Sadly, though, she doesn’t have a snowball’s chance in hell of landing this eligible bachelor. Here’s why:

When Bertram leaves his home in Roussillon to live at the king of France’s court, Helen comes up with an ingenious excuse to follow him to Paris (okay, stalk him to Paris). As it turns out, the king of France is suffering from a disgusting and deadly illness and there’s not a doctor in France that’s been able to cure him. Conveniently, Helen’s got some of her doctor-dad’s leftover prescription medicine lying around, along with step-by-step instructions about how to cure the king’s illness. She’ll go to Paris and offer up her services to the king, who will be so thankful that he’ll let her choose any husband she wants.

After some discussion about whether or not Helen is actually qualified to practice medicine, the king of France figures, “What the heck? Why not give this kid a shot at curing a complicated and potentially deadly medical condition?”

After Helen delivers a miraculous cure, the grateful King rewards our girl by lining up the kingdom’s most eligible bachelors and saying something like “Go ahead, take your pick.” (The only thing missing from this scene is one of those awkward reality show rose ceremonies.)

Guess who our bachelorette chooses? That’s right: Bertram. There’s just one hitch. Bertram is completed mortified by the match and thinks that marriage to a “poor physician’s daughter” (2.3.111) is beneath him. He throws a huge tantrum, but the king forces him to marry Helen anyway.

Bertram flat out refuses to have sex with his new bride and runs away to join the military in Florence, Italy. Naturally. But first, Bertram tricks Helen into going back to Roussillon to live with his mom. To add insult to injury, he sends her a rude letter that goes something like this:

Even though the king of France made us get hitched, I will never, ever, ever love you. Also, I’ll never sleep with you or act like a husband to you unless you can meet the following conditions: (a) get my ring off my finger and (b) get pregnant with my kid. These two things are never gonna happen so, have a nice life.

In Italy, our runaway groom (that would be Bertram) becomes a big war hero in the duke of Florence’s army. Also, he spends all his spare time seducing Italian virgins. When we catch up with him, he has set his sights on a girl named Diana and uses all of his best and smoothest moves trying to score a date with her.

Meanwhile, Helen is supposed to be on her way to the shrine of St. Jaques (in Spain), but she winds up in, you guessed it, Italy. (Oops. It looks like our girl doesn’t have map or a nifty GPS app on her iPhone.)

When Helen finds out that her husband has been putting the moves on Diana, she hatches an evil-genius plan to get him back. Helen convinces Diana to agree to sleep with Bertram, who has to give Diana his ring before she’ll go to bed with him. Then, Helen and Diana pull off a classic bed trick, where Helen takes Diana’s place in bed without Bertram knowing it. (Obviously, this all goes down in the dark and there’s absolutely no talking.) During their steamy hook-up, Helen puts her ring on Bertram’s finger.

Soon after, Helen starts a rumor that she’s died of a broken heart. Everyone is in mourning –everyone except Bertram that is. When he hears the news, he updates his Facebook status to single and high tails it back to Roussillon, where the king of France is visiting. Bertram is about to get engaged to another girl, but when the King spots Helen’s ring on Bertram’s finger, there’s a big show down and Bertram is sort of arrested for the murder of Helen. To make matters worse, Diana shows up with her mom and accuses Bertram of taking advantage of her. Bertram lies about everything and is about to be carted off to the slammer when… drumroll please…

Helen shows up with Bertram’s ring…and she’s pregnant with his kid. Punk’d! She all but shouts “Ah ha! I’ve got you now, Bertram!”

When Bertram sees his family ring and Helen’s huge belly, it doesn’t take long for him to put two and two together. He seems to experience a sudden (we’re talking like 1.5 seconds) and miraculous change of heart and declares that from this point forward, he’ll be a good husband to Helen.

The play ends with everyone being more or less satisfied.