CSDs can be used for land reclamation, for deepening harbors and for the construction and expansion of ports and navigational channels or for pipeline trenching in the seabed. When the dredged material is being used for land reclamation, the distance between the dredging and disposal areas is usually shorter than the distances covered by trailing suction hopper dredgers. CSDs can tackle almost all types of soil, although of course this depends on the installed cutting power. CSDs are built in a wide range of types and sizes; the cutting head power ranges between 20 kW for the smallest to around 6,000 kW for the largest.

In fact, dredging sites are not always easily accessible by water. When access is very shallow, an area may have to be ‘pre- dredged’ prior to the actual dredging. In the case where there is no water access, a small demountable cutter may have to be brought to the site by road.

HOW DO CSDS WORK?

The working principle of the CSD is that it disintegrates or breaks the cohesion of the soil to be dredged mechanically by a rotating cutter head. The suction tube and cutter head are attached to the so-called ladder as described above. The ladder with cutter head is positioned at the fore of the vessel. To begin with, this ladder is lowered under water, then the dredge pump(s) are started and the cutter head set in motion. The ladder is then moved down until it touches the seabed, or until it reaches the maximum depth. If the required dredging depth has not been reached at the end of a swing, the ladder is set more deeply and the ship will move in the opposite direction. Step by step one or more layers of the water bed are cut away as the ladder is lowered one cutting thickness at the end of each swing. The thickness of the layer that can be removed by one swing (cut thickness) depends both on the diameter of the cutter head and the type of soil. 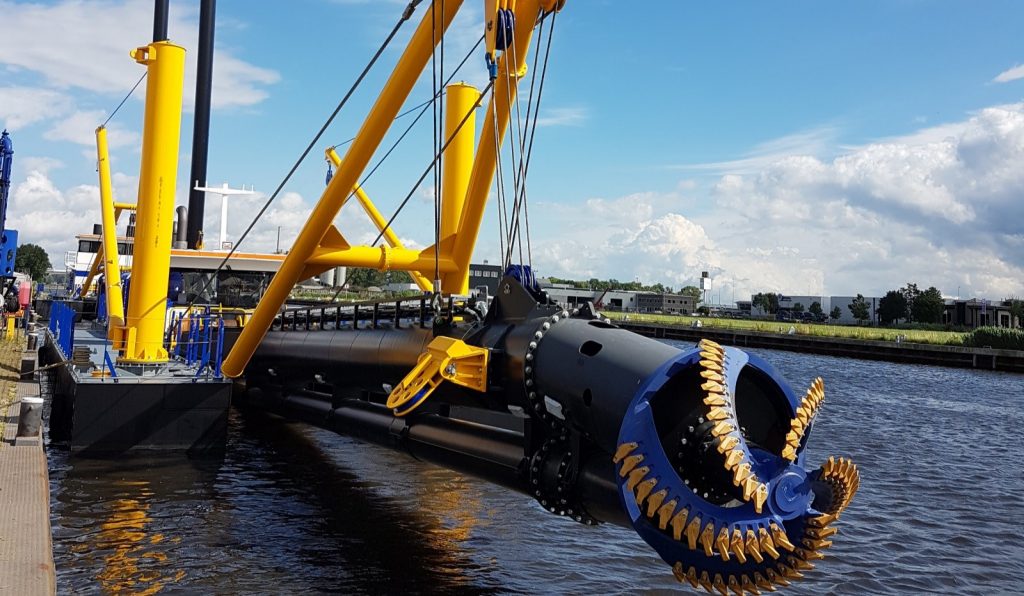