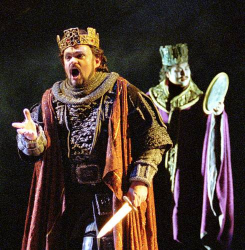 Lady Macbeth has received a letter from Macbeth stating that he has been named Thane of Cawdor. The letter reveals his ambition to be king and the prophecy given by the Witches. Lady Macbeth discloses her ambitious nature and vows to help Macbeth succeed in his ambition to be crowned King. She receives word that King Duncan will be arriving soon and is perplexed because Macbeth has not informed her himself. Macbeth arrives and they concur that by any means he should be crowned King:

And fill me from the crown to the toe top-full

Lady Macbeth tells him he should be a gracious host and they will speak on the matter later that evening. 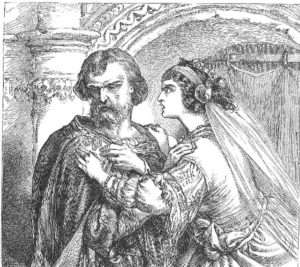 Macbeth gives a dinner for Duncan and his guests that evening. During the dinner, Macbeth leaves and begins to contemplate the plan he and Lady Macbeth have discussed. He struggles with his conscience and the fear of eternal damnation if he murders Duncan. This internal conflict is reinforced because Macbeth is Duncan’s cousin, he is a beloved king, and Duncan is a guest in his home:

First, as I am his kinsman and his subject, Strong both against the deed; then as his host, Who should against his murderer shut the door, Not bear the knife myself.

Lady Macbeth calls Macbeth a coward and implies that he is less than a man for faltering in his plan to murder Duncan. Her resolute desire and quest for power sway Macbeth to agree with her and he decides to go through with the plan.

6 thoughts on “William Shakespeare | Summary of Macbeth: Act I, Scene 5-7.”