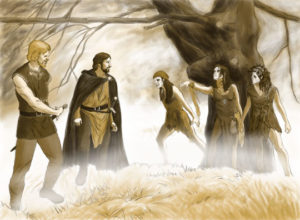 The play opens on a bleak and lonely stretch of land in Scotland. Three Witches report that the battle Macbeth is fighting will be over by sunset; they plan to meet with Macbeth on the barren battlefield, or “heath,” at that time. The setting is enhanced by an approaching thunder storm and three Witches foretelling of the evil they foresee for the future: “Fair is foul, and foul is fair,” what is good will be bad and what is bad will be good. 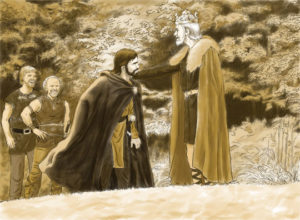 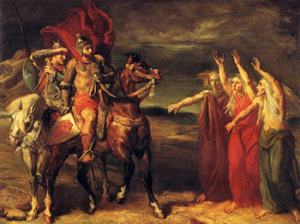 The Witches are on the battlefield discussing the evil and disruptive deeds they have been doing. The First Witch had a disagreement with a sailor’s wife because the wife would not give her any of the chestnuts she was eating. This angers the Witches and they decide to torture the woman’s husband by creating a windstorm that will blow his ship to all points on the compass. The storm will be so intense he will not be able to rest. The first Witch says, “I’ll drain him dry as hay.” She then brags about the “pilot’s thumb,” or small bone, she has as a charm. The Witches hear a drum and the approach of Macbeth.

Macbeth and Banquo enter and are unaware of the Witches at first. Macbeth’s first line in the play, “So foul and fair a day I have not seen,” alludes to the initial prophecy of the Three Witches. Banquo then spies the Witches, but he is unable to determine if they are men or women: “You should be women, and yet your beards forbid me to interpret that you are so.” The Witches then greet Macbeth with his current title, Thane of Glamis, and two titles he is yet to have, Thane of Cawdor and King. Macbeth is perplexed by their greeting because he knows that both the Thane of Cawdor and King are still alive.

Banquo, hearing such a good fortune for this friend, inquires as to his own fate. He is told that he will be lesser and greater than Macbeth; even though he will never be king, his sons will. The Witches then dissolve into the air, leaving Banquo to wonder if they were real or just a hallucination. 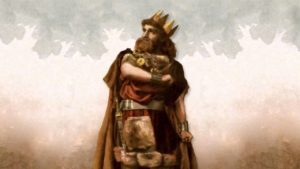 Duncan inquires if the Thane of Cawdor has been executed and expresses regret as to giving the order to have him killed Macbeth enters and they exchange accolades. Duncan names his own son, Malcolm to succeed him as king. This creates a conflict for Macbeth as Malcolm is another obstacle to overcome toward his goal to succeed Duncan as king.

The Prince of Cumberland! That is a step on which I must fall down or else o’erleap for in my way it lies. Stars, hide your fires; Let no light see my black and deep desires.

Duncan plans to visit Inverness, Macbeth’s castle, and the scene ends with Macbeth leaving to prepare for Duncan’s visit.

8 thoughts on “William Shakespeare | Summary of Macbeth: Act I, Scene 1-4.”