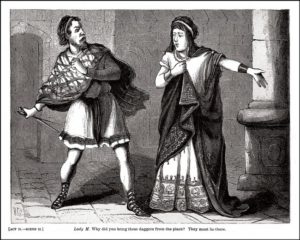 There is something in the air that disturbs Banquo and Fleance and they cannot sleep. As they discuss the reasons for their inability to sleep, Macbeth joins them. Banquo confesses that he has been dreaming about the prophecy the Witches told them and he is concerned about the evil nature of the Witches. Macbeth responds by saying, “I think not of them.” Both agree to discuss the matter at a later date. Banquo and Fleance retire to their chambers to sleep.

As Macbeth, alone in the hall, contemplates the murder he is about to commit, a bloody dagger appears before him:

Is this a dagger which I see before me, The handle toward my hand? Come let me clutch thee. I have thee not, and yet I see thee still… And on thy blade and dudgeon gouts of blood.

Macbeth is still hesitant about killing Duncan. Once he hears Lady Macbeth’s signal, though, the ringing of the bell, he no longer delays and proceeds to Duncan’s room.

Lady Macbeth is filled with anticipation for Macbeth’s safe return and the completion of Duncan’s murder. Her fears surface when she is startled by a noise that turns out to be nothing more than an owl screeching. She is concerned that the plot may not be completed and that Macbeth will be discovered before Duncan is murdered.

Lady Macbeth reveals in a soliloquy that when she placed the daggers in Duncan’s chamber she considered killing Duncan herself. However, Duncan looked too much like her father and she could not commit the act herself: “Had he not resembled / My father as he slept, I had done’ t.”

When Macbeth returns he is distraught and regrets the murder he has committed. Macbeth reports to Lady Macbeth that as he stepped past Duncan’s guards, he heard a voice cry, “Sleep no more! Macbeth hath murdered sleep.” In his tormented state, Macbeth leaves the murder scene carrying the bloody daggers.

Macduff and Lennox have arrived at Macbeth’s castle at Inverness at daybreak. The Porter jokes and carries on with Macduff about his drinking and lack of success with women the night before as Macbeth joins them. Macduff leaves Lennox and Macbeth to discuss the violent storm they had the night before.

Macduff rushes back to the courtyard with the news that the king had been murdered. Macbeth and Lennox rush to the chamber and Macduff sounds the alarm. Macbeth confesses when he saw the slain Duncan he was filled with rage and murdered Duncan’s guards. He felt they were the murderers because they were smeared with blood and had the daggers in their hands. Confusion and shock ensues and Lady Macbeth faints. Donalbain and Malcolm fear foul play has been committed by someone close to them: “Where we are, / There’s daggers in men’s smiles; the nea’er in blood, / The nearer bloody.”

Donalbain says he will go to Ireland, while Malcolm agrees to go to England. They flee the castle in fear of their own lives while Macduff, Macbeth, and the others agree to meet to discuss the catastrophe. 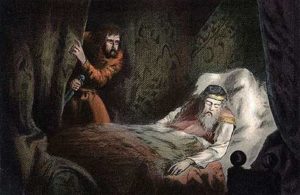 The following day Ross and an old man discuss the strange events that have taken place. Ross says that Duncan’s horses became enraged, broke out of their stalls, and ate each other. Other unnatural events are going on with the birds and the weather. They fear all of this has to do with Duncan’s murder.

Macduff joins the discussion and it is revealed that Duncan’s body has been taken to the family plot at Colmekill and Macbeth has been named to succeed Duncan as King. The coronation will take place at Scone. Ross plans to go to Scone and Macduff leaves for Fife, of which he is Thane. Macduff fears the worst is yet to come.