The Witches are preparing a magic potion and casting a spell. They chant incantations three times to make sure the charm’s power will be strong. Macbeth greets the Witches and demands that they give him information about the future. The Witches call upon Apparitions to inform Macbeth of his future.

Macbeth urges the Witches to give him additional information about the future. The Witches show him a procession of kings and the last holding a mirror with the reflection of Banquo. The Witches disappear and Macbeth asks Lennox if he saw the Witches as he entered the room. Lennox said he did not. Lennox then informs Macbeth that Macduff has fled to England. Macbeth says he plans to kill Macduff’s family. 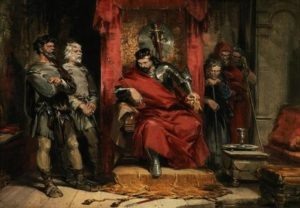 Lady Macduff is angered and enraged that her husband, Macduff, has left for England without telling her. She does not know what they are to do now. Ross tries to console her, but she feels her husband is a traitor and a coward. Macduff’s son questions his mother about the father’s disappearance. She tells him his father is dead; he does not believe her. A messenger arrives and warns Lady Macduff that her life is in danger and she must leave immediately. The Murderers arrive and kill Lady Macduff and her son. 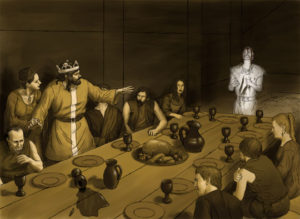 Malcolm and Macduff are in England. Malcolm questions Macduff’s motives and wants to make sure that he has not been sent by Macbeth. Malcolm goes on to confess that he has many vices that may make him a far worse King than Macbeth. Macduff’s response is that Malcolm is the rightful heir to the throne and Macbeth must be unseated at all cost. Malcolm is convinced that Macduff is sincere and says that the things he said about himself were not true. Malcolm says he is sincere and pure and seeks only good for Scotland.

Ross enters and informs Malcolm and Macduff that Scotland is in a terrible condition. At first Ross hesitates, but then informs Macduff that his family has been brutally murdered. Macduff is shocked and vows to revenge the murder of his family.